Home Uncategorized Today’s the day to get ENTWINED!

Today’s the day to get ENTWINED! 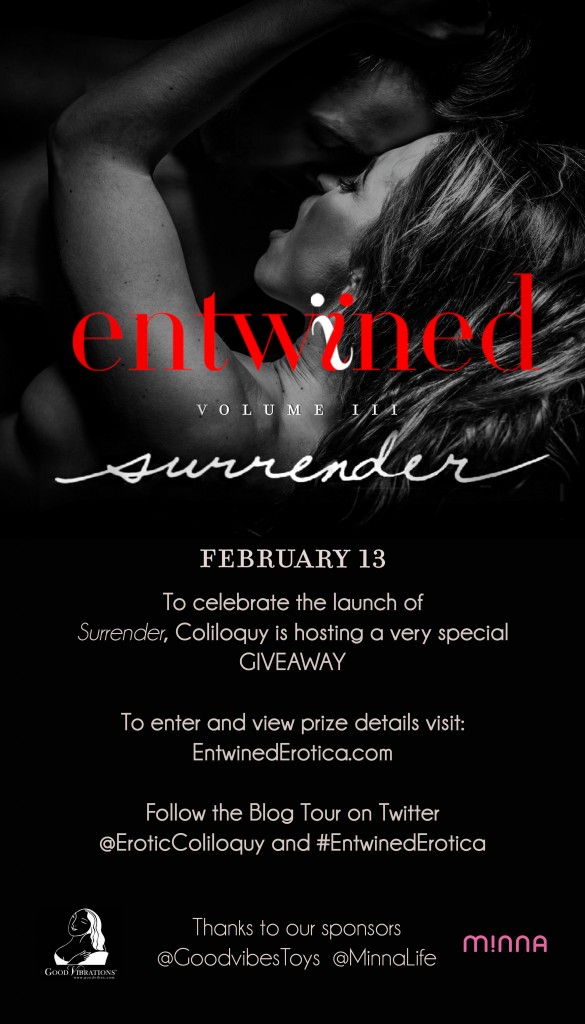 The day of Surrender is finally here!

Entwined Volume III: Surrender is now available as both an e-book and an app!

I’ve been waiting for this day a long time; I turned in my finished novella for the book, “Watching Kate,” 14 months ago — back on New Year’s Eve 2012. (I had promised the delivery of my piece “by the end of the year” and damned if I’m not literal.)

It was actually in the summer of 2012 that I first got involved — Louise Fury, an agent with the L. Perkins Agency approached me and asked me if I’d be interested in being a part of the project. She explained it as a “choose your own erotica” kind of thing, where one person came up with the initial characters and setup and then wrote a first chapter. And then that author and three others all began their stories with “chapter 2” taking the characters from chapter 1 down separate story paths.

I thought that sounded like a helluva lot of fun and said “sure, count me in — but I’m not interested in trying to write a first chapter. I’ll let someone else kick this off, and then dive into somebody else’s setup and have fun.”

So guess what? That Saturday, I was sitting in my office having coffee, and thought of what could be a fun setup for one of these — a story based on a woman finding her fiance’s secret sex chatroom transcripts… about her!  I sent off an email to the agent and said “you know, I have this idea for a setup for that Entwined thing you were talking about…” and away it went. Coliloquy liked my concept, and a couple weeks later, I sent them the first chapter that would ultimately kick off Entwined Volume III: Surrender. You can read a good chunk of that on the Entwined Site.

Took me a couple months before I went back and wrote the rest of my version of the story, but Entwined is a big part of what I did with my second half of 2012. At least writing-wise!

I’m really excited to be part of this project and can’t wait to see what readers think.

To celebrate the official release today, the publisher, Coliloquy is hosting a giveaway with some cool prizes from GoodVibes and Minna Life (I wish I could enter!). The bookcover “poster” above outlines it, and you can enter the contest in the widget below.