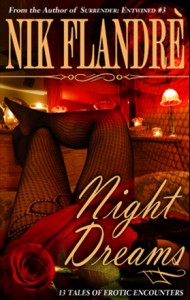 Since then, I’ve published stories in a number of erotica magazines and webzines, from Clean Sheets, 1000 Delights and Scarlet Letters to In the Buff, a UK magazine. My work has also appeared in three anthologies from Circlet Press, including Mind & Body and Jingle Balls.

This year, I have my first long-form bit of erotica coming out — a novella  from Coliloquy called “Watching Kate.” It’s part of their Entwined Erotica series. My story will appear in Surrender: Entwined Vol. III.

To celebrate my 15-year erotica journey, this week a collection of my previously published stories (along with a couple new ones) has been released! It’s called Night Dreams, and you can get an e-book edition now on Amazon. A print edition will be available shortly. It includes the full version of “Auto-Stimulation,” (which was abbreviated in Club), along with a dozen other stories. You can read a sample of what’s in the book here on the site — the story “Oasis” is free to read in the Fiction section. 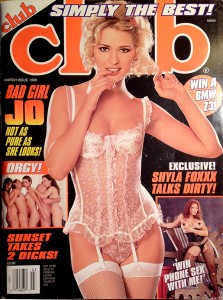 It’s been a lot of sexy fun since that first publication of “Auto-Stimulation”  in Club and it’s been a “stimulating” trip down memory lane to dig out some of those old stories from the magazines they appeared in.