Home Uncategorized NIGHT DREAMS is on a Kindle Countdown Deal for 99 cents!

NIGHT DREAMS is on a Kindle Countdown Deal for 99 cents! 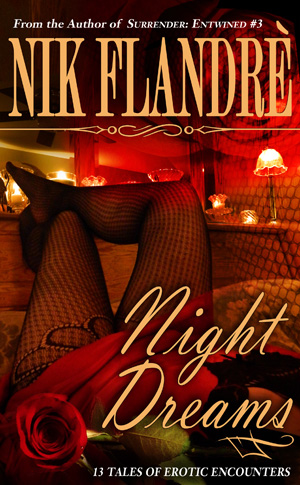 NIGHT DREAMS is a brand new retrospective collection of my published erotica from the past 15 years and includes my first published bit of erotica – the Knight Rider-esque sexy car tale “Auto-Stimulation,” which appeared in the men’s mag Club back in 1998. It also includes stories from Circlet Press anthologies and magazines like Clean Sheets, Scarlet Letters, 1,000 Delights and even a couple brand new tawdry tales.

The first couple reviews have been great. One called the book:

Another mentions the opening story “Touch” and says “Sex with no touching? Imaginative scenario that includes one of the hottest shower scenes I’ve read. 5 Stars”

NIGHT DREAMS is just $.99 right now on Amazon…This weekend it will go up to $1.99 and then next week it will return to normal price. I hope you’ll give it a sample/borrow/download while it’s on sale!